Indigenous Peoples' and First Nations Peoples' are the most common terms used to describe the original people of the regions of the Americas and Canada.

The indigenous peoples of the Americas are the pre-Columbian peoples of the Americas and their descendants. Commonly ethnographers classify Indigenous Peoples in the United States and First Nations Peoples in Canada into ten geographical regions with shared cultural traits or cultural areas. The following list groups peoples by their region of origin, followed by the current location. See the individual article on each tribe or First Nation for a history of their movements.

Although some indigenous peoples of the Americas were traditionally hunter-gatherers—and many, especially in the Amazon basin, still are—many groups practiced aquaculture and agriculture. The impact of their agricultural endowment to the world is a testament to their time and work in reshaping and cultivating the flora indigenous to the Americas. Although some societies depended heavily on agriculture, others practiced a mix of farming, hunting and gathering. In some regions the indigenous peoples created monumental architecture, large-scale organized cities, chiefdoms, states and empires.

Indigenous peoples of the United States are commonly known as Native Americans or American Indians, and Alaska Natives. 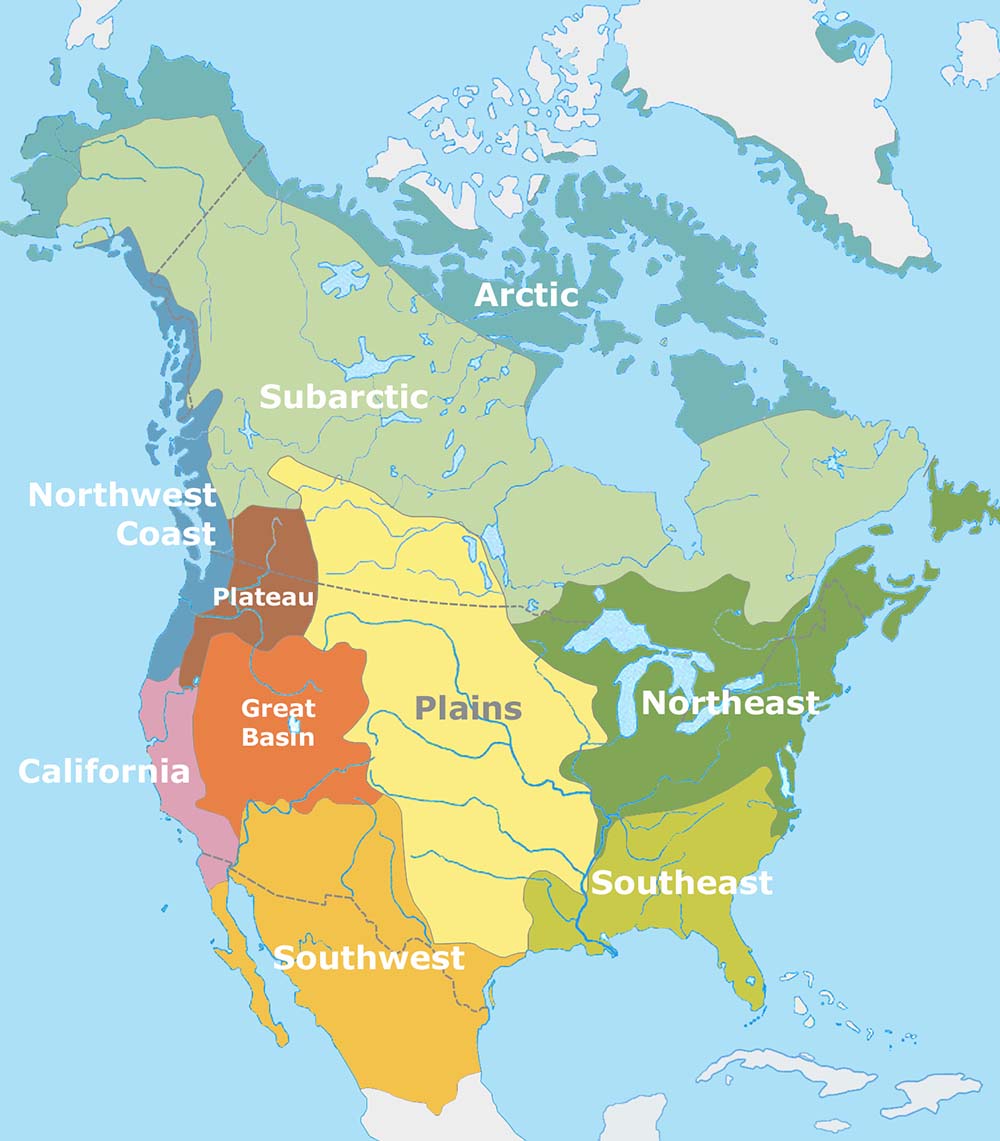 Native American ancestry is vast and diversified across North America, spanning many different clans and tribes and branches. Each tribe adapted to their specific regions giving each its own traits. Native American ancestry can't simply be lumped into one term or class. The continent can be broken up into many regions to help sort the Native American ancestry into smaller groups. To the Northeast we have the Algonquin and Iroquois tribes. The Algonquin tribes wore little clothing except for during the cold months; the clothing they wore was made of animal skins mainly, they were hunters and gatherers, as well as farmed their own vegetables. The Iroquois tribes wore mainly animal skins as well. Like the Algonquin tribes they also would hunt and gather and grow their own crops, they also participated in trading.

Native American ancestry in the southern regions is in ways drastically different than those in the north due to climate differences. To the southeast the Seminoles wore clothing made of plant fibers woven together as opposed to those in the north who wore furs to keep warm, they would also hunt and plant their owns foods. To the southwest you have the Apache and the Navajo. The Navajo wore rabbit skins and would gather and hunt for the majority of their food. The Navajo also participated in raiding which at times could blur the paths in Native American ancestry by taking other tribes forms of art as well as people and in a sense mixing the tribes. The Apache wore deerskin and in later years began to wear cotton clothing with Mexican patterns, which again showed the traits passing through tribes such as when the Navajo would raid. Also in the southwest were the Pueblo tribes whom also wore wool which was woven; they mainly farmed and hunted for their food.

The plains Indians portrayed the Native American ancestry that is generally seen in films and photos. They wore buffalo skin clothing as well as the beautiful feather head dresses that is commonly merged into all Indian tribes in film and literature. The plains Indians main supply of food came from hunting, which, due to settlers moving westward and killing buffalo caused the plains Indians to migrate and travel trying to find the now scarce food supplies. There are still many more Indian tribes and clans in each of those listed in the short summaries above, so one can easily see how vast the possibilities of Native American ancestry can be.

Application of the term "Indian" originated with Christopher Columbus, who, in his search for India, thought that he had arrived in the East Indies. Eventually, those islands came to be known as the "West Indies", a name still used. This led to the blanket term "Indies" and "Indians" for the indigenous inhabitants, which implied some kind of racial or cultural unity among the indigenous peoples of the Americas. This unifying concept, codified in law, religion, and politics, was not originally accepted by the myriad groups of indigenous peoples themselves, but has since been embraced by many over the last two centuries.

Migrations to the Continents

The specifics of Paleo-Indian migration to and throughout the Americas, including the exact dates and routes traveled, are the subject of ongoing research and discussion. According to archaeological and genetic evidence, North and South America were the last continents in the world to gain human habitation. During the Wisconsin glaciation, 50–17,000 years ago, falling sea levels allowed people to move across the land bridge of Beringia that joined Siberia to northwest North America (Alaska). Alaska was a glacial refugium because it had low snowfall, allowing a small population to exist. The Laurentide Ice Sheet covered most of North America, blocking nomadic inhabitants and confining them to Alaska for thousands of years.

Indigenous genetic studies suggest that the first inhabitants of the Americas share a single ancestral population, one that developed in isolation, conjectured to be Beringia. The isolation of these peoples in Beringia might have lasted 10–20,000 years. Around 16,500 years ago, the glaciers began melting, allowing people to move south and east into Canada and beyond. These people are believed to have followed herds of now-extinct Pleistocene megafauna along ice-free corridors that stretched between the Laurentide and Cordilleran Ice Sheets.

Another route proposed involves migration – either on foot or using primitive boats – along the Pacific Northwest coast to the south, including as far as South America. Archeological evidence of the latter would have been covered by the sea level rise of more than 120 meters since the last ice age.

The time range of 40,000–16,500 years ago is debatable and probably will remain so for years to come. The few agreements achieved to date include:

1) Origin from Central Asia (DNA studies reported in 2012 indicate the area of Altai Republic, with a separation of populations 20,000-25,000 years ago), 2) Widespread habitation of the Americas during the end of the last glacial period, or more specifically what is known as the Late Glacial Maximum, around 16,000–13,000 years before present.

Stone tools, particularly projectile points and scrapers, are the primary evidence of the earliest human activity in the Americas. Archaeologists and anthropologists have studied differences among these crafted lithic flaked tools to classify cultural periods. The Clovis culture, the earliest definitively-dated Paleo-Indians in the Americas, appears around 11,500 RCBP (radiocarbon years Before Present), equivalent to 13,500 to 13,000 calendar years ago.

In 2014, the autosomal DNA was sequenced of a 12,500+-year-old infant from Montana, whose remains were found in close association with several Clovis artifacts. These are the Anzick-1 remains from the Anzick Clovis burial in Montana. The data indicate that the individual was closely related to present North American Native American populations. But, the DNA was ancestral to present-day South American and Central American Native American populations. The implication is that there was an early divergence between North American indigenous peoples and those of Central and South America. Ruled out were ruled hypotheses which posit that invasions subsequent to the Clovis culture overwhelmed or assimilated previous migrants into the Americas.

Similarly, the skeleton of a teenage girl (named 'Naia' after a water nymph from Greek mythology) was found in 2007 in the underwater caves called sistema Sac Actun in Mexico's eastern Yucatán Peninsula. DNA was extracted and dated. The skeleton was found to be 13,000 years old, and it is considered the oldest genetically intact human skeleton ever found in the Americas. The DNA indicates she was from a lineage derived from Asian origins and also represented in the DNA of the modern native population.

According to both indigenous American and European accounts and documents, American civilizations before and at the time of European encounter had achieved great complexity and many accomplishments. For instance, the Aztecs built one of the largest cities in the world, Tenochtitlan, the ancient site of Mexico City, with an estimated population of 200,000. American civilizations also displayed impressive accomplishments in astronomy and mathematics. The domestication of maize or corn required thousands of years of selective breeding, and continued cultivation of multiple varieties was done with planning and selection, generally by women.

Cultural Presentations - An up to the minute listing of American Indian cultural presentaions.

Festivals & Events - Pow Wow's, Cultural cerimonials and other native special events all over the US and Canada.

Tribal Casinos - Plan your next vacation at an American Indian Casino, see the landscape, the Indigenous culture and more, hit the jackpot.